Skin aging is a complex process, impacted by both intrinsic and extrinsic factors which affect the overall aging process of the skin and its appearance. Antioxidants are a known ingredient in anti-aging formulations and have been shown to be photo-protective, anti-inflammatory and protect against free-radical cellular damage. Combining the protective benefits of multiple antioxidants administered orally and topically with skin conditioning agents may result in a synergistic treatment for photodamaged skin. This clinical study evaluated a treatment regimen including two dietary supplements as well as a complete skincare regimen including five cosmetic formulations, in its ability to improve the appearance and condition of photodamaged skin.

This was a 12-week, IRB reviewed, monadic clinical evaluation of the ability of a regimen including two oral dietary supplements and a five step skincare system, including a bar soap, solution, serum, lotion and cream as directed for twelve weeks, to improve the appearance and condition of photodamaged skin in healthy male and female subjects. Specific endpoints evaluated the condition and appearance of skin and the ability of the regimen to improve skin firmness, elasticity, hydration and exfoliation, as well as improve hyperpigmentation. Evaluations were performed at Baseline, Week 4, 8 and 12 and included both subjective and objective measures. 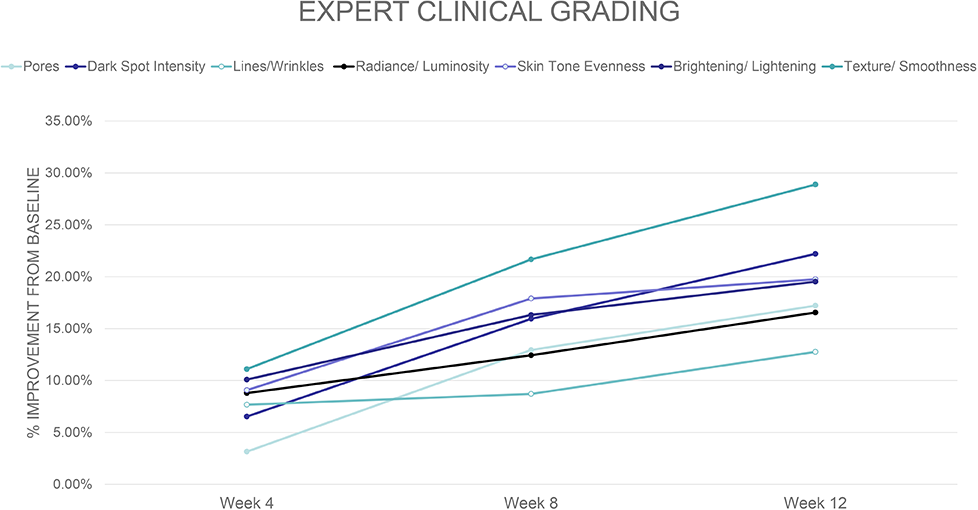 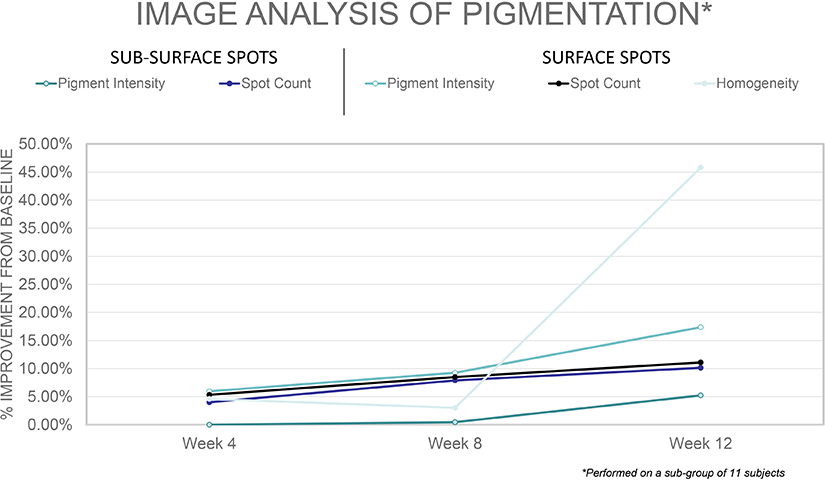 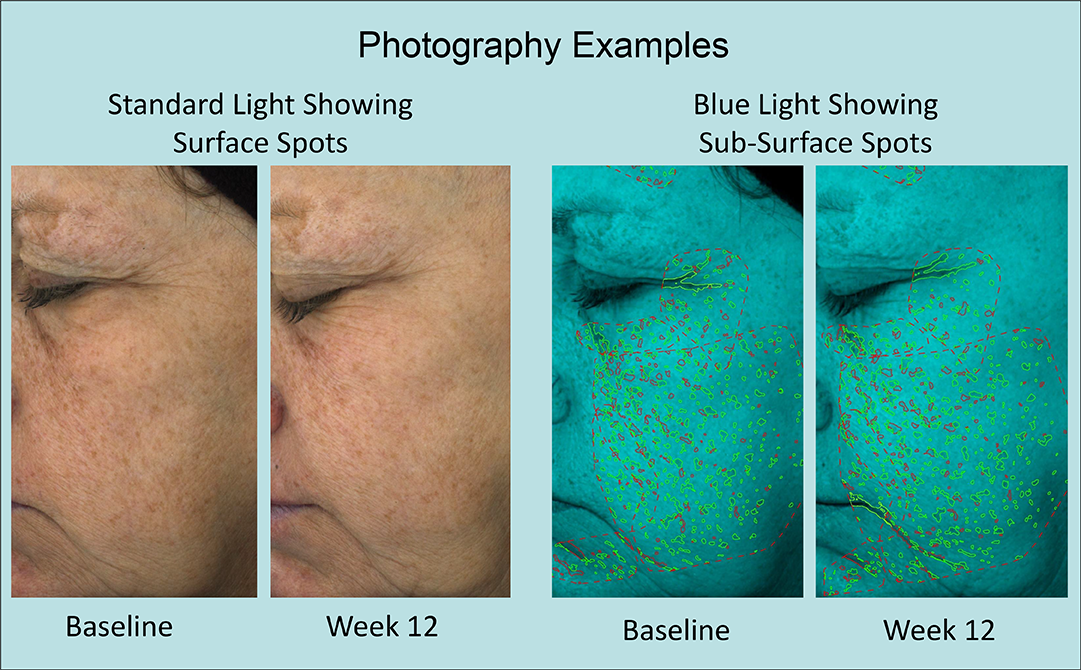 Thirty men and women between the ages of 34 and 65, Fitzpatrick Skin Types II-VI, with uneven skin tone, dark spots, visible pores and lines and wrinkles completed study participation. After 12 weeks of regimen use, statistically significant improvements were observed in all clinically graded attributes, significant improvements were observed beginning at four weeks and sustained improvement was observed with continued use. Notably improvements were found in 80% or more of the subjects for all attributes with 100% of subjects showing improvement in Skin Tone Evenness, after eight weeks of product use. Image analysis was performed on a sub-group of 11 subjects and further supported the expert grading results, providing additional detail on line and wrinkle improvement, significant surface and sub-surface spot improvement and pore appearance. Bioinstrumentation results showed significant improvements in exfoliation and hydration, with 22% increase after four weeks, as well as improvement in firmness and elasticity which further supported the clinical grading findings, with 17% and 47% improvements observed after 12 weeks, respectively. Analysis of blood collected from a sub-group of 18 subjects did not show a mean increase in Glutathione level. However 44% of the subjects screened did show an increase after 12 weeks of product use. A trend was observed that levels actually decreased over time in subjects with high Glutathione levels at baseline. More research is needed to determine the impact of baseline levels in terms of effect and link to cosmetic results. Overall the regimen was well received and well tolerated by the study panel as evaluated by subjective questionnaires and objective and subjective tolerance evaluations.

Under the conditions of this study, the use of the regimen resulted in significant improvement in skin condition and appearance in terms of skin complexion and pigmentation as well as providing anti-aging benefits beginning as early as four weeks with continued improvement observed after twelve weeks of use.